What will be the first trillion dollar industry? There are a number of potential candidates and it’s likely that at least one of the following five industries will cross the threshold in the next couple of decades.

The first trillion dollar industry will likely achieve the feat through the disruptive effect of ‘cutting out the middleman’, a trend that has increased with digitization and the growth of the Internet, and already seen spectacularly, for example, in the case of the Amazon and the disruption of the book industry and then the cunsumer industry in general, by eCommerce (Amazon may become the first trillion dollar company next year).

Cryptocurrency is simply speeding up the longterm process of the digitization of money, and enabling the ultimate end point – the removal of banks and governments as ‘the middleman’ and leaving the cryptocurrency itself as the pure digital unit of value transfer.

At the start of this year, the total market value of all the cryptocurrencies passed the $700 billion mark.

The following chart compares the current growth of cryptocurrency users to that of internet users in the 90s. It is estimated that cryptocurrency is currently at the point the internet was in 1994 in terms of user reach. 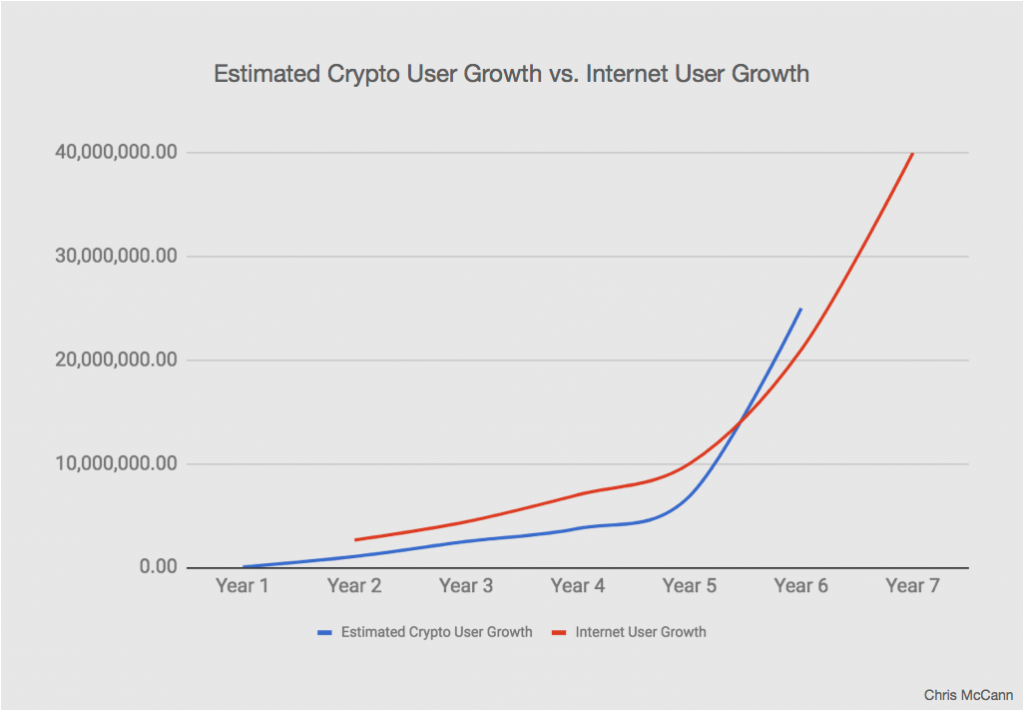 It is estimated that the asteroid belt between Mars and Jupiter contains $700 quintillion worth of precious metals within its small rocky worlds. If you need that putting in more Earthly terms, it works out at something like $100 billion for every single man, woman, and child on the planet.

The ‘middleman’ here is essentially the insanely expenisve quantities of rocket fuel needed to transport the stuff back to Earth, not to mention the complex technological leaps that are still needed to make asteroid mining a reality. However, the technology required isn’t insurmountable, and a number of private companies are now racing each other to make the cost of rocket launches far cheaper, most famously Elon Musk and his company SpaceX. Despite this, the cost of even collecting the first small sample of material from an asteroid and returning it to Earth is prohibitive – a recent NASA planned mission to do just that was scrapped because of the billion dollar cost. However, a number of private firms are already hoping, in the long run, to tap into the staggering wealth potential of asteroid mining, and trying in the meantime to make a small side profit from their delveopment of the technologies needed. And once it does become profitable to capture and return asteroid resources to Earth, all bets are off. It is estimated, for example, that just one particular asteroid contains more platinum than has ever been mined on Earth.

Imagine a pill that could keep you young and healthy indefinitely. What would be the market for such an ‘immortality pill’? It would pretty much be the entire population of the Earth. Many might say they would not want to live forever, but very few would be honest if they claimed they wouldn’t like to stay young and healthy.

Remarkably, science is very close to defeating aging. There will unlikely ever be an ‘immortality pill’ as described above, but rather a variety of treatments that need to be undergone every so often. For example, ‘senolytic drugs‘ are currently in clinical testing that promise to actually reverse many of the effects of aging. In as little as five years time, there could be clinics (at least in countries with relaxed regulation) offering these senolytic drugs and treatments. As senolytics work by destroying ‘zombie cells’ that build up over time and have been linked to an entire rosta of age related diseases and frailties, it is expected that each client will have to recieve the treatment every five to ten years. And if you don’t? Well you literally grow old and die.

More widely, transhumanism is the philosophy that promotes scientific efforts to allow humans to overcome their bodily limitations, including old age and death. Here, we might say that the middleman is the human body. When we have full control over human biology, as transhumanists wish and many predict will happen this century, the physical barrier between our desires, wants, and their satisfaction is in a sense removed, potentially indefinitely.

Artificial Intelligence and robotics are widely feared to be a disruptive technology that will leave millions unemployed, and perhaps even threaten humanity itself. It’s true that millions of jobs will be replaced by robots and A.I. systems over the coming decade alone, but history has shown repeatedly that technology creates new jobs as much as it destroys others (usually replacing mundane roles with the need for higher skilled positions). Many future tech pundits are predicting that ‘this time it really will be different’, but in the near term at least, it’s likely that there is a trillion dollar wealth of opportunity in the massive social and economic changes that A.I will cause.

Virtual and augmented reality is predicted to become the next paradigm shift in computing. In a way, it could be considered the ultimate end point in the trend of digitization removing the ‘middleman’, and therefore, potentially the largest trillion dollar industry of all. In this case, removing the middleman involves removing the need for a screen as a digital interface. Firstly, this will be through a pair of glasses, through which you can watch movies, work on your Excel spreadsheet, and talk on Skype, all without the need of a TV, laptop, or phone. Ultimately, the glasses themselves will disappear. The end point of virtual and augmented reality (or ‘extended reality’) is nothing less than the digitization of reality itself.

If this sounds like sci-fi, or is too remote for you, consider that it is projected that the combined virtual and augmented reality market will be worth $220 billion by 2022, up from ony 6 billion dollars in 2016.